My impressions after watching Joss Whedon’s micro production Much Ado About Nothing are pretty simple, but my feelings about it’s creation are much more complicated.  If I separate everything going into it from the finished project in an effort to be fair to the production’s value, I may unjustly discredit the film just as I would taking all things into account.  All in all however, I found it to be pretty enjoyable.

I have not been so enamored with Whedon since he scripted and helmed the pivotal Marvel production The Avengers. Having seen how mediocre his direction can be and seeing a clip out of Much Ado itself, I was prepared for a terrible cheap look for the no budget movie.  I was pleasantly surprised at the quality of photography and the direction which showed more forethought and creativity than I expected.  The house was smartly used for the most part and created a very unique and special feel for the movie.  Alexis Denisof, whom fans will recognize as Wesley from Buffy the Vampire Slayer and Angel is superb as Benedick.  Though American, Alexis is known for his british accent and lived in London for some time.  It adds a small dose of irony to hear him speak shakespeare with an American tongue.  Aside from that, his whole performance as the character is admirable and he almost bore the entire movie on his back with the support of Fran Kranz as Claudio, and Reed Diamond and Don Pedro (Both actors from the Whedon series The Dollhouse). Not to discredit the rest of the cast, but I thought this unit was particularly enjoyable and really seemed to grasp the material.

The whole cast was assembled from friends of Joss who had worked with him at one time or another, the side effect of which is that they all have a special place in the hearts of the fans who fell in love with them in their previous settings.  It adds a sense of familiarity in the spirit the impromptu production conveys.  Some of the dialogue comes off a little rocky. I noticed the lighter moments were harder for some of the actors to pull off than the scenes that took a more serious tone.  One of the things that unfortunately did not work for me was the casting of Amy Acker as Beatice.  As much as I love Acker, I just could not be persuaded to accept her in the role.  I would think a more obvious choice was Marena Baccarin, Or even Alyson Hannigan, Alexis’ wife.

I realize of course that the nature of the production was somewhat prohibitive in terms of assembling the cast (Joss made it during a vacation from post production on The Avengers) and it’s wonderful how many great talents got together for this, including Acker, but that’s part of what I mean when I talk about the strength of the movie, as it is, without the distractions of how it came to be.  As a no budget movie put on by a big family of friends in the director’s house, It came out pretty damn good.  But– and this is a big but, like something Sir Mix-a-lot would only dream of– would you pay the premium ticket price or purchase the $20-$25 Blu-ray if it didn’t have Joss Whedon’s name attached to it?  There is even a $15 paperback written by Joss Whedon and William Shakespeare!  Come on.  Are you kidding me?

If a student film maker with limited resources and a passion for film pulls something like this together, then it ought to be supported financially by those who would encourage independent filmmakers.  But should a successful writer/director with a dedicated fan base who has landed (and is yet to finish post production on) the monumental Avengers gig not be held to a higher standard?  I’m not saying it should not have been made, but maybe he should have waited.  It seems to me like the fans are being exploited and taken for granted.  In time– perhaps sooner than later considering what a let down Agents of Shield has turned out to be– they will resent him.

One such lapse in the quality that might have been forgivable in the hands of an amateur is the locations used for the scenes with Dogberry and the watchmen.  It was an unfitting mess compared to the rest of the production.  But it was shoehorned in in order to shoot the whole thing on Joss’ property, with a minimum of preparation.

As a whole– though it is enjoyable and has a terrific cast and is shot beautifully in black and white– the settings and performances are inconsistent with the entire production and the momentum slows from time to time when it ought to be less indulgent and just keep moving.  It’s pretty good for what it is, but what it is is not what it should be. 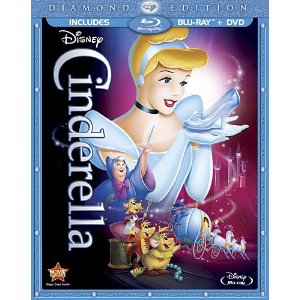 I had the surprising pleasure of watching the new Blu-ray Diamond Edition release of the classic Walt Disney picture Cinderella.  This is one of the best told and most enjoyable of all of Walt’s fairy tale adaptations.  Some of those long loved Disney Classics are so far removed from the direct to DVD sequels they’ve spawned that returning to those childhood favorites is a real treat.  These films truly stand the test of time.

Cinderella has all the charm, humor and beautiful artwork you can expect from Walt Disney, but it’s also one of his best animated features.  I was never too interested in Cinderella,  I remember some of the comedy bits, the suspenseful climax as the mice lug the key up the tower to rescue Cinderella before the Grand Duke leaves, and the songs, but I was more interested in The Sword in the Stone and The Jungle Book at that age.  Returning to this film as an adult I am really able to appreciate the artistry and the very clean storytelling.

The story of the little girl condemned to a life of servitude to her wicked step mother and two step sisters is filled with wonderful characters, visions, scenes and music that demands respect from an audience that has been exposed to recent cheaper takes on the Disney classics that lack so much of the heart and depth of the originals.  It takes you through a typical day in Cinderella’s life as she trudges through her chores, but when the king announces a ball is to be held as a plan to get the Prince married she must try to find time in her busy schedule to prepare.  Even with the help she receives from her mice friends, the Step sisters ruin her chance to go, but the Fairy Godmother arrives just in time, to give her the magical night that will change her destiny with that memorable song “Bibbidi Bobbidi Boo,”.  One of my favorites is Cinderella’s rendition of “Sing Sweet Nightingale” in the bubbles while she washes the floors and the devious cat, Lucifer tracks dust all around her in the mean time.

Among the special features, of which there are many, is a short documentary on the “Real Fairy Godmother”  The woman the character was based on who later became the Fairy Godmother of Burbank, for all of her charity work.  You’ll also be delighted to find the hilarious short “Tangled Ever After” featuring Pascal and Max as the ring bearer and flower– um… lizard.  You’ll also get a sneak peek behind the scenes at the amazing expansion of Fantasyland at Walt Disney’s Magic Kingdom in Disney World.  Let me just say it’s the best use of space since the creation of the park.